Reflecting on the year that was. 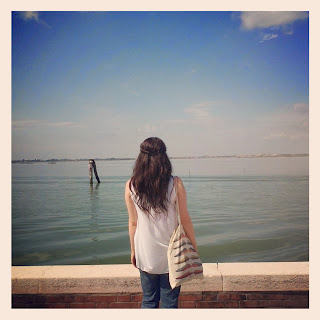 January was a busy month. I was already seeing my therapist, was feeling slightly better, and had spent a not too bad New Year's Eve( rare enough to be said). The month went by quickly or so it seems to me.

My friends and I got a late Birthday present to one of our friends, aka a surprise trip to Berlin which coincided with my birthday too. It was awesome, travelling with friends to a city I love, despite the cold that almost froze my fingers to the point they would fall( yesyes I come from the South of France keep that in mind!). 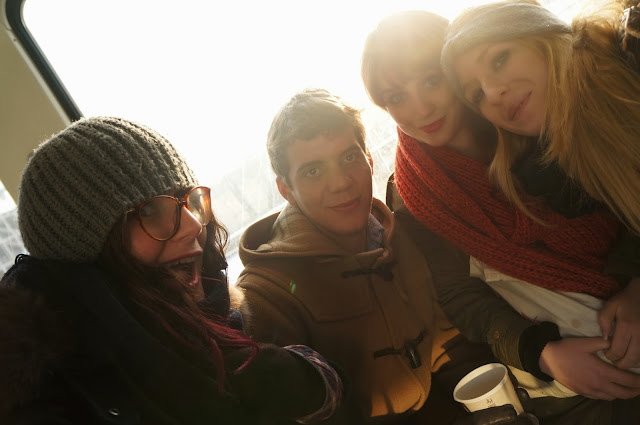 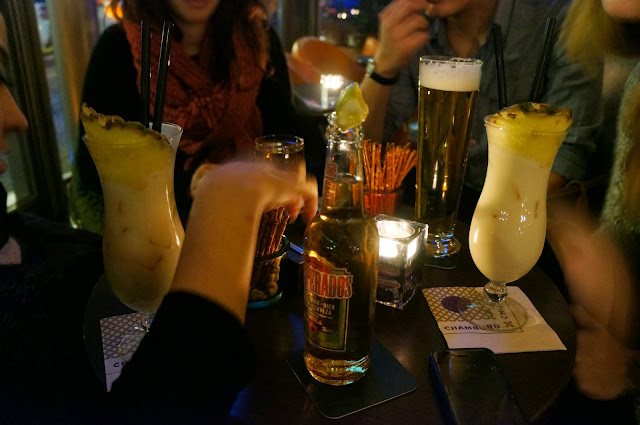 We had snow in Paris, and I remember a specific day my sister and I went for a long walk in the city, excited to discover, the first time for her, the beautiful sightseeings covered in white. 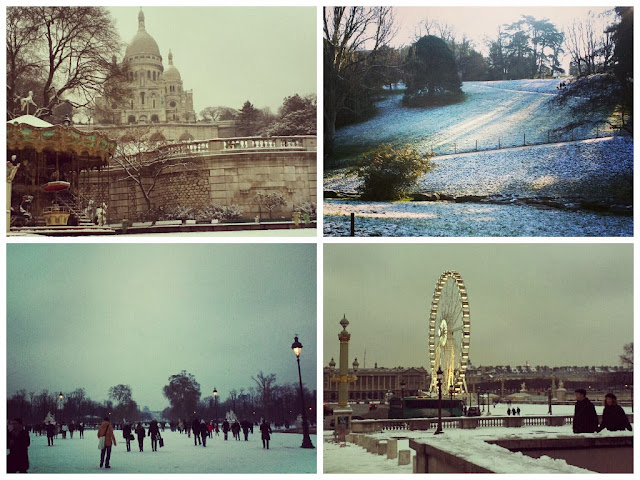 What has to be said about January on a more personal level is that I had to break a relationship with someone I really liked and cared for. It wasn't easy at all, and I took this decision in the flight from Berlin to Paris, decision that caused a lot of tears. Eventhough this relationship was quick, short and disappeared as fast as it started, it made me feel loved again, which hadn't happened in a long time. My feelings were sincere and I was honest, but now I can say I was probably wrong and just let myself fall for something that looked reassuring, comforting and sweet, but wasn't nor what I wanted nor what I needed in the longterm. I don't regret it, I just regret hurting someone badly. 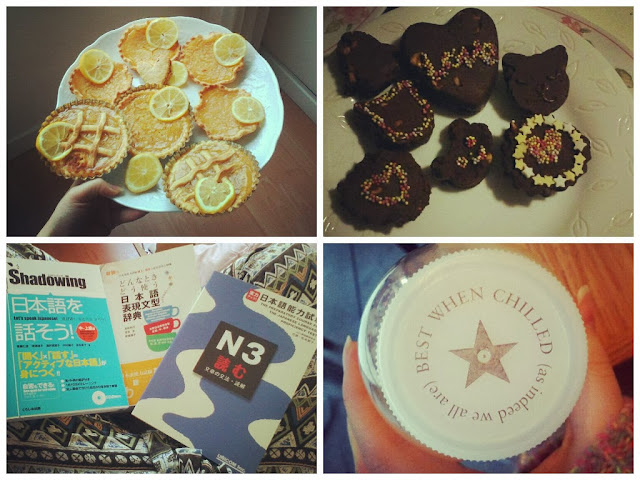 February ... didn't leave a remarkable impression on me. My sister and I made ourselves chocolate on Valentine's day, and I started talking again to an "old" friend around that time of the year, which made me pretty happy. I also got my blue wig, detail to some, awesome piece of news to me!
I think this was in February that I decided to be a bit more serious about japanese studies, even if I were to not study it at uni anymore. A pretty good decision. March resembled February like a twin, or almost. I played a lot with my blue wig, did a few videos in japanese, and cooked a lot of vegetarian meals, including delicious vegetarian lasagna. Two of my friends also payed me a really quick yet nice visit, which felt really good. 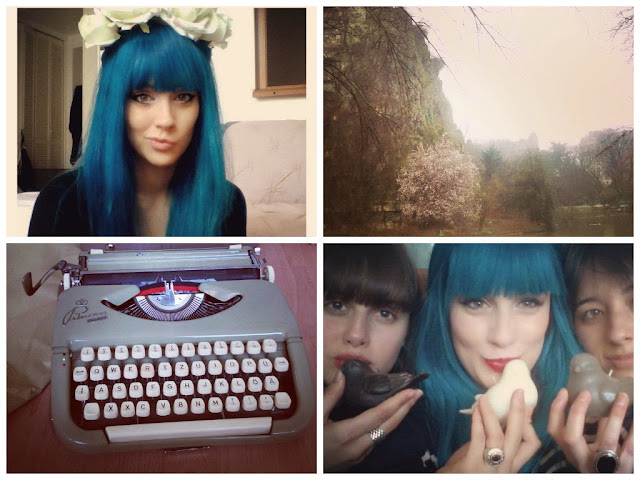 I remember April a lot more. I've always loved Aprils. One of my sister's friend visited us a for a few days, we had good food and I ate a raw diet for a week. I loved April. The weather was amazing, we had such beautiful days, I started drawing again and started planning my summertrip, especially Moscow. I also got in touch with a really nice and interesting guy, who eventually took me for a fool, but still. April was the start of many snapchats, messages and what I hoped would be a very good friendship. I guess things didn't turn out exactly as I hoped they would, but we're still sort of in touch anyway. 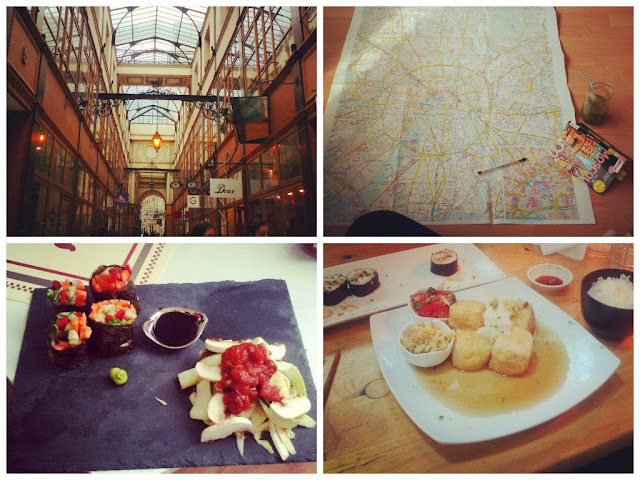 The following month was a very important month for it was the month I started running and transitionning to veganism. In brief, an healthy and pretty spiritual month. I also did quite a bit of sightseeing in Paris, went for the first time to le Louvre and discovered how good blackbeans icecream tastes. Also was talking a lot to this guy. I also took the decision to quit japanese at uni, and to join the frenchliterature major. Despite this difficult decision to take, I felt super good during this month, thanks to this change in my lifestyle. I think I ran 4kms for the first time and was super excited about it haha. 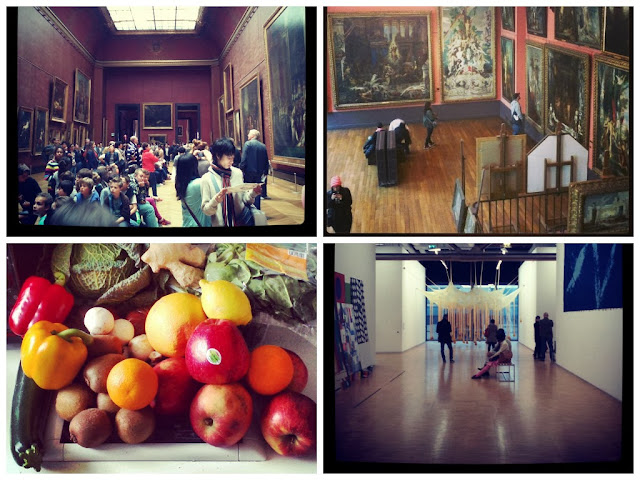 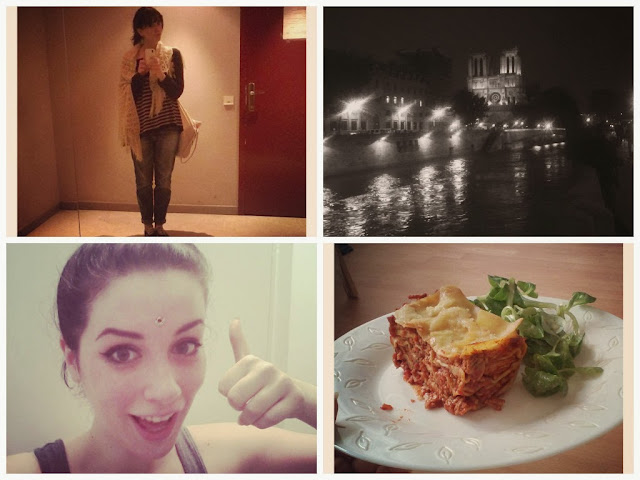 In June my sister and I went to Italy, stopped by Venice, Florence, Sienna and Cinque Terre. Ah, just writing those words I start missing the italian sun. 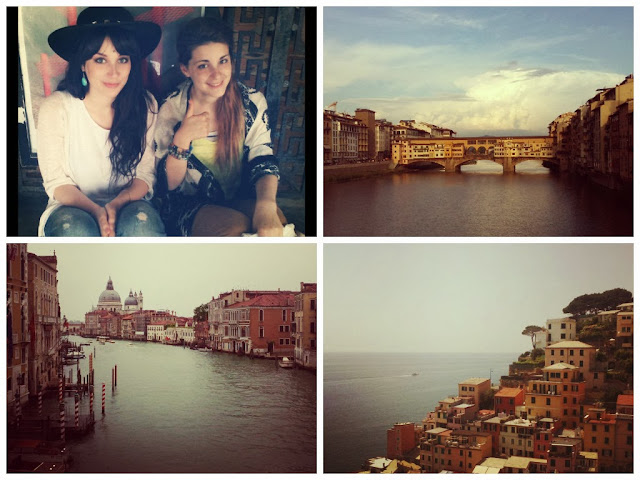 In June I also hosted my first couchsufers, two american girls first, two turkish boys next and then two taiwanese girls. The only thing I have to say about couchsurfing is why didn't I start before?! 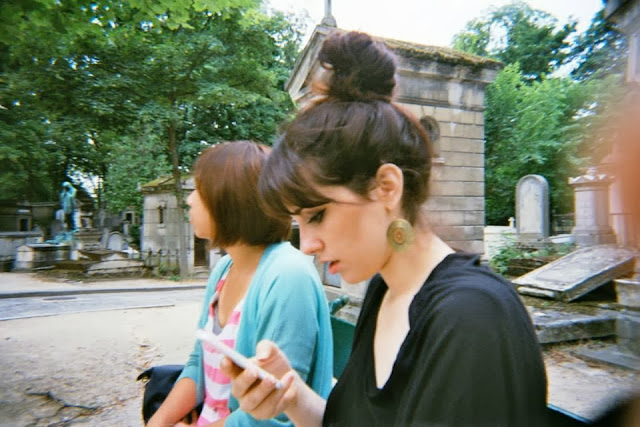 Right there, in between June and July I had a high episode of loneliness, nostalgia and sadness, I almost felt like I didn't want to go on the trip I had planned anymore. I'm glad I didn't listen to these gllomy feelings!
July was the adventure month! Bratislava, where we had the sweetest hosts ever, Budapest, the foreverlove, Kiev(with much troubles to get there) and Moscow. Now that I think of it, May, June and July were just amazing months, filled with everything I love.. Friends, lovely people, long talks, travels, beautiful places, good food, laughters and adventures. Ever since I started travelling summers have become awesome. 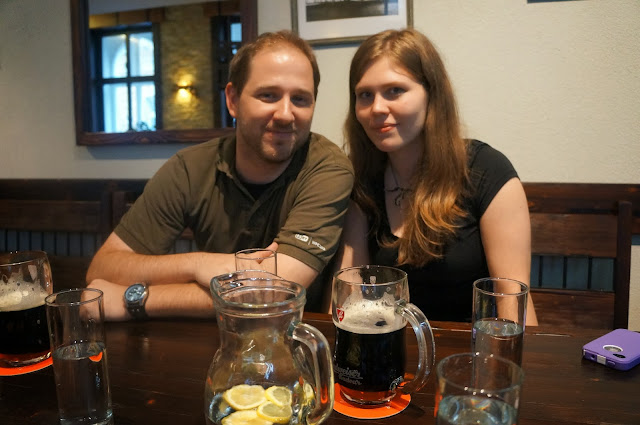 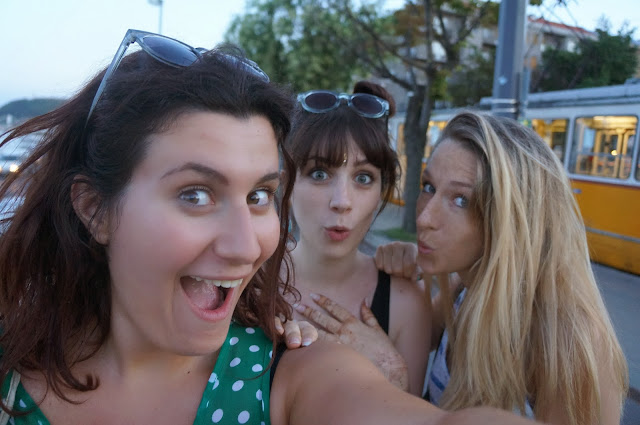 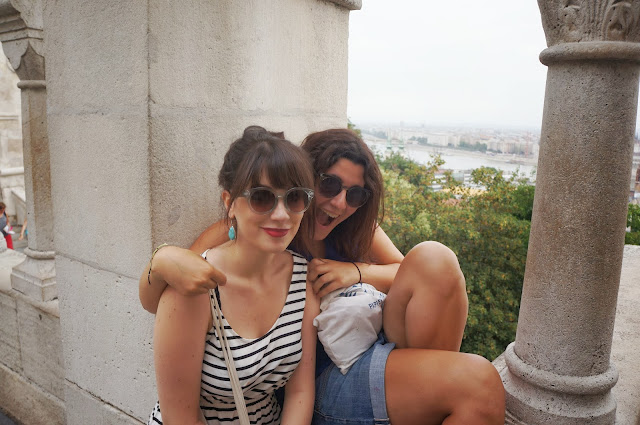 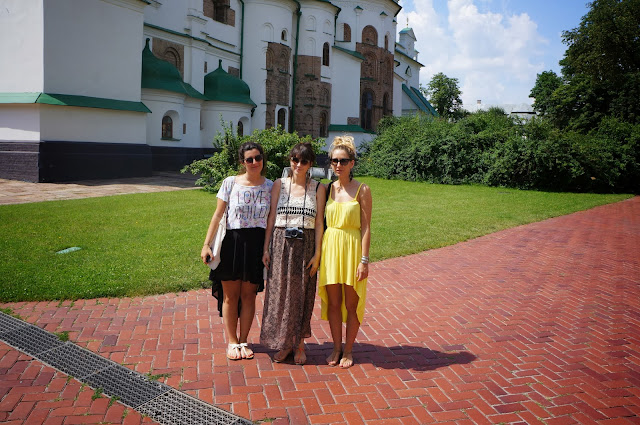 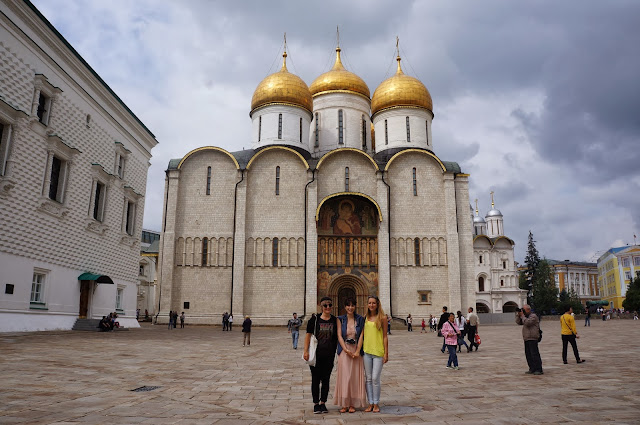 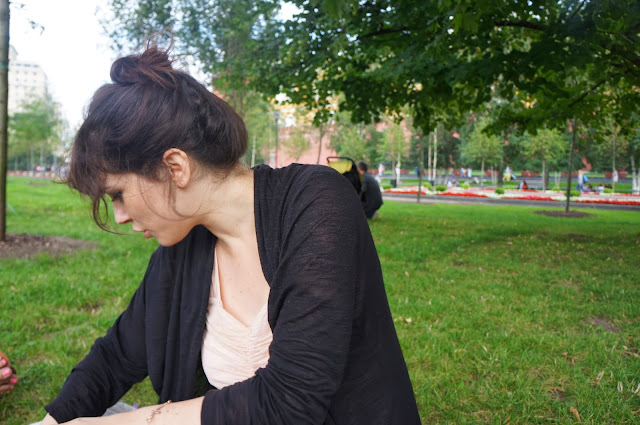 In August I hosted Josie, an awesome vegetarian, feminist, polyglot british girl and met Shannon the loveliest and wittiest person ever. I feel so blessed for all the people I got to meet this year. In August I also had to say goodbye to one of my closest friends who left for London. I was and still am very glad for her, but many things throughout the year and around this departure left me a very bitter taste. I won't lie, it didn't feel very nice. Oh and I finally ran 10kms in 1h time. Probably one of the biggest achievement of this year. 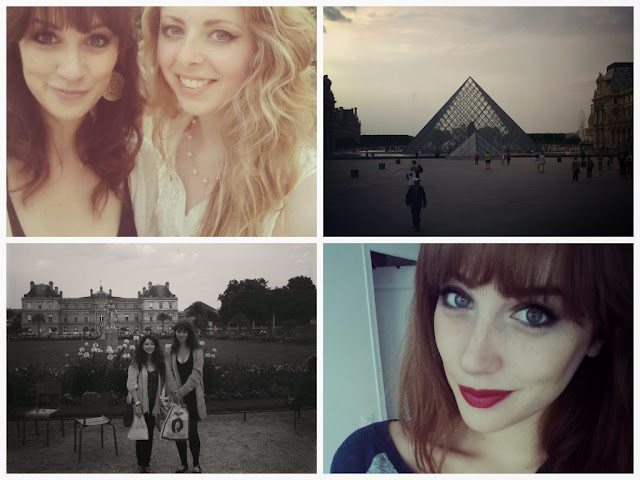 September. Or what feels to me like another new year because of the scholar calender. September was a relief. A relief to see I could be normal, go to school and enjoy it, to see I was getting a little bit over my anxiety and survive to change. Also had one of the best time of the year, attending The Gazette's show. My father came to spend a few days with my sister and I, which resulted in sightseeing again! 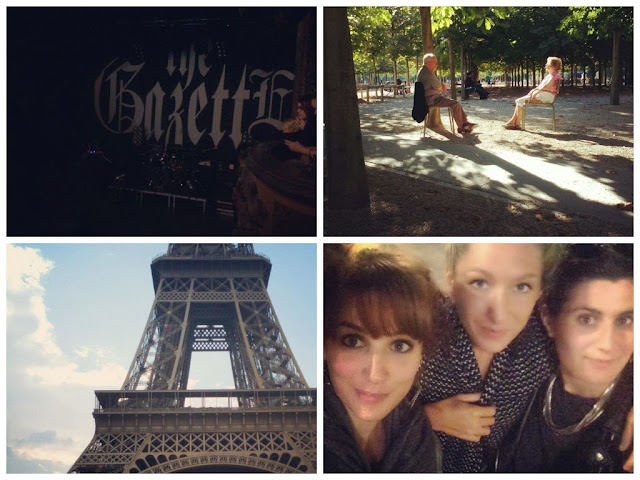 I don't have much to say about October and November, they were busy months with school and work, I didn't have time to run, to see friends, to do anything really. I still found time for a quick trip to Cologne and Eltz Burg. Those months were a bit hard to deal with because I had very little time for myself, and felt a bit sad seeing my physical state getting worse, my creativity as well... But that's a student life. Also in early October, this guy I was very happy to be in touch with got himself a girlfriend and thought it was probably unecessary to keep on talking with me. 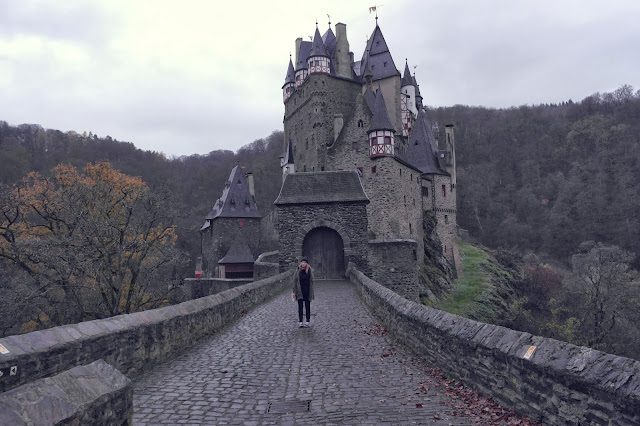 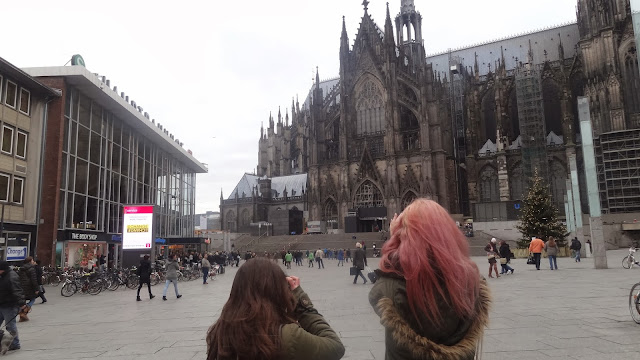 And here I am now, in 2014 already.
2013 wasn't a very eventful year. It was more of a year of transition, readjusting to life, readapting to it and accepting and letting go of many things. I got really upset and lonely, I had a lot of resentment towards some of my friends, but finally understood that I was in charge of my life, and that I needed to do things for myself first, not in the hope that people would do them with me.

My friends, by letting me down on two big occasions this year, made me grow up, in a painful, yet efficient way. People are people, and people will sometimes hurt you, by liying to you, leaving you or neglecting you. It shouldn't prevent you from being happy because you deserve to be happy no matter how people treat you. And you shouldn't wait for an apology or a discussion that won't come while those people are moving on. You too, move on. You deserve it.

Eventually, people show how much they value, love and respect you in words but most importantly, in actions. Sometimes people make mistakes. We all do.I used to forgive, now I just acknowledge it. I don't feel like I have this duty to forgive or be fine with what they've done to me anymore. I'm allowing myself to disagree and not forget everything I've been done wrong. Not dwelling into resentment, that's no good. Just allowing myself to say " I wasn't okay with this, I'm still not okay with this, whether you'd like to think I am or not."

I discovered a motivation, a strengh and a will that I never suspected. For the first time in many years, I felt proud of myself. And sport brought me that. I won't let go of this source of joy and accomplisment.

I start this year in peace with many things, pleasant and unpleasant ones. Focused and confident. I still have this voice inside my head that tells me how hard it's going to be, how I could fail, how bad those past years were, how worthless I am or how nobody likes me. I still have this anxiety sometimes that prevents me from going out alone, talking in public, responding to the phone or keeps me awake at night.

But the voice isn't as strong as it used to be, and a new voice has appeared. A voice that says you've been there, you've been so low and sad and alone, and you've come this far. You have amazing people rooting for you, you're lucky, you're healthy, you can do it if you put your mind into it. You can do it, you will do it. God is watching you, loving you and won't abandon you.
I am so grateful for all the amazing and beautiful and kind people I know, those I've met in 2013 and those whom are still in my life years and years after we met. More than ever I've become this being of love for all living beings, and this love is a treasure.
2014 will be the year of closure for many things, a year that, hopefully will take me towards my dream.
So far, it's been great.


Thanks to everyone who's had a little thought for me this year, and I wish you all a very very happy new year.
Publié par Antastesia. à 13:28